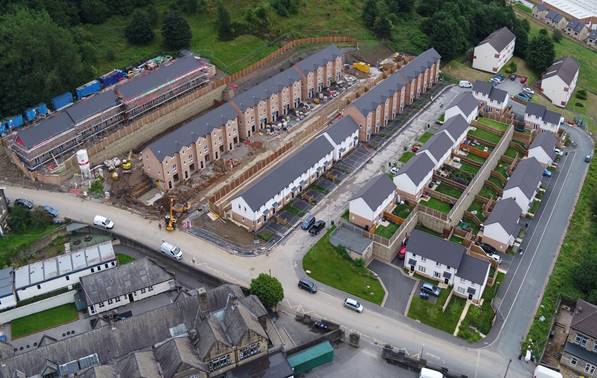 The construction of 40 family-sized homes in Bradford is now in the final stage of development, Incommunities has confirmed in an update.

The 40 affordable-rent homes at Bolton Woods will be officially opened later this month via the Rent to Buy scheme.

Each home will have its own electric charging point and individual parking spaces and will feature fully fitted kitchens and bathrooms.

Bird and bat boxes will also be fitted to the properties to ensure local wildlife flourishes in the area, Incommunities has said.

The redevelopment sees the new homes converted from six blocks of previously “hard to let” flats.

Incommunities’ has revealed that the development will be named after long-standing board member and former Bradford Council leader Ian Greenwood.

Greenwood was an Incommunities group board member for a number of years and local ward councillor until he passed away in 2018.

Geraldine Howley, Incommunities group chief executive, said: “I am delighted to see this development taking shape and welcome Bradford Council’s decision to name one of the roads onto the site in tribute to Ian.

“Ian was passionate about delivering good quality housing for everyone and served Incommunities, Bradford Council and the city’s communities with distinction.

“I look forward to seeing new tenants move into their smart new homes over the coming months.”

24 homes for rent were completed at the Bolton Woods site in 2019 in an earlier phase of construction.

Both phases of the development have been supported through Homes England’s Affordable Homes Programme.

The development complements existing plans by developers and the council to create an ‘urban village’ in the Bolton Woods area that is close to city-centre transport.

The Incommunities’ scheme is being led by the group’s in-house development team, which is acting as the main contractor in an unprecedented move for a Yorkshire registered provider.