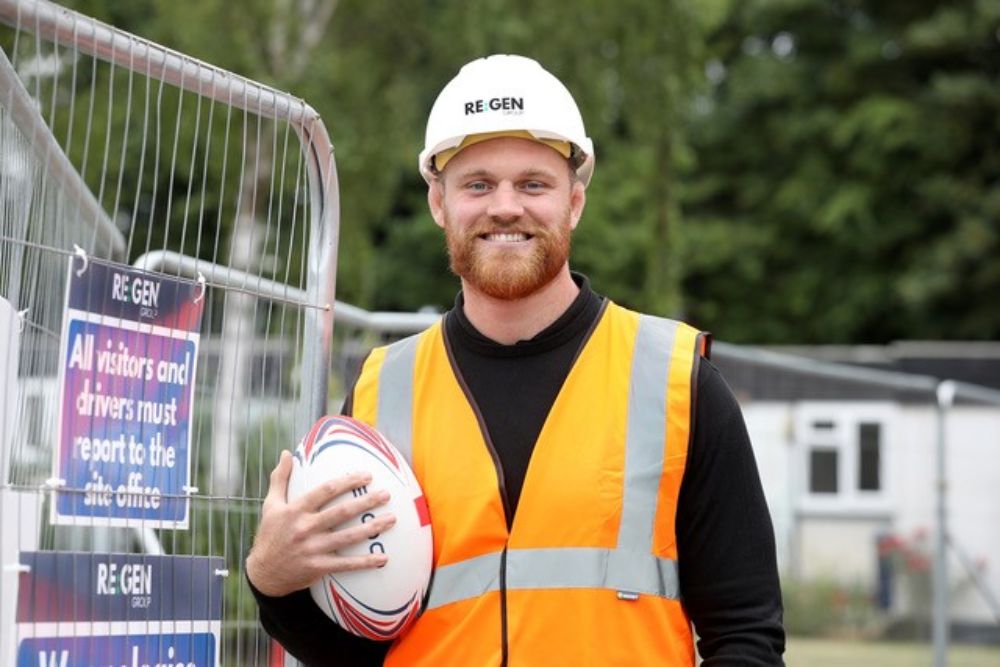 After announcing his retirement from the sport, where he enjoyed a career spanning 10 years, the former Newcastle Falcons player is now relishing a career in the construction industry.

Darren, 32, started his playing career in 2010 in Bristol, favouring the lock position.

He enjoyed spells at Worcester Warriors and Newcastle Falcons before joining French side RC Vannes in 2019.

He also played at national level on the U19 England squad.

After deciding to retire from the sport to provide greater stability for his young family, he applied for a role at RE:GEN Group.

Bosses at the firm were impressed with his enthusiasm and outlook and created a new role as a health, safety, and environmental apprentice.

Darren has since been learning the trade and has gained several qualifications including Level 2 Plumbing, Level 3 Carpentry and Joinery, QLS Level 3 Property Development, and recently a QLS Level 5 Diploma in Environmental Management.

He is also in the process of completing the Prince2 Foundation and Practitioner certificate in project management.

Commenting on his appointment, Darren said: “During my interview with the management team, there was a real familiarity and likeness to rugby, particularly when it came to RE:GEN’s attitudes towards growth.

“Hearing their chief executive discuss his ambitions for the Group was empowering – just like hearing a coach talking about progression.

“Although the move is daunting, RE:GEN have instilled great confidence and belief in me from day one.

“Through their facilitation of my learning and with their support and mentorship, I’m looking forward to seeing how my next chapter evolves.”

Darren will split his time between the office and site and will get hands-on experience working on different sites and projects.

He will also complete his health and safety qualifications.

Lee Francis, CEO at RE:GEN Group, added: “At RE:GEN, we’re big on breaking down the barriers of what an ‘apprentice’ stereotypically stands for within industry, and Darren is the perfect player to bring this cultural shift to the forefront.

“Although there’s a lot of work to be done to shape Darren’s role and skillset, we intend to look up (quite literally) to Darren to learn as much as possible from his unique experiences, which have served him over the last 10 years in professional sport.

“There’s no denying that he will play a pivotal role in defining our future strategies and ‘the RE:GEN Way’ of how we do things when it comes to protecting our people.”

He added: “Some may think that the switch from the world of sport to construction is an unusual one; however, there’s an incredible amount of crossover.

“Time management, attention to detail, proactiveness, and teamwork are all just as applicable to the changing-room as they are on the building site.

“Similarly, the recent introduction of player safety protocols, and understanding of regulation changes has inadvertently given Darren an early exposure to the demands his new health and safety role will present him with.”