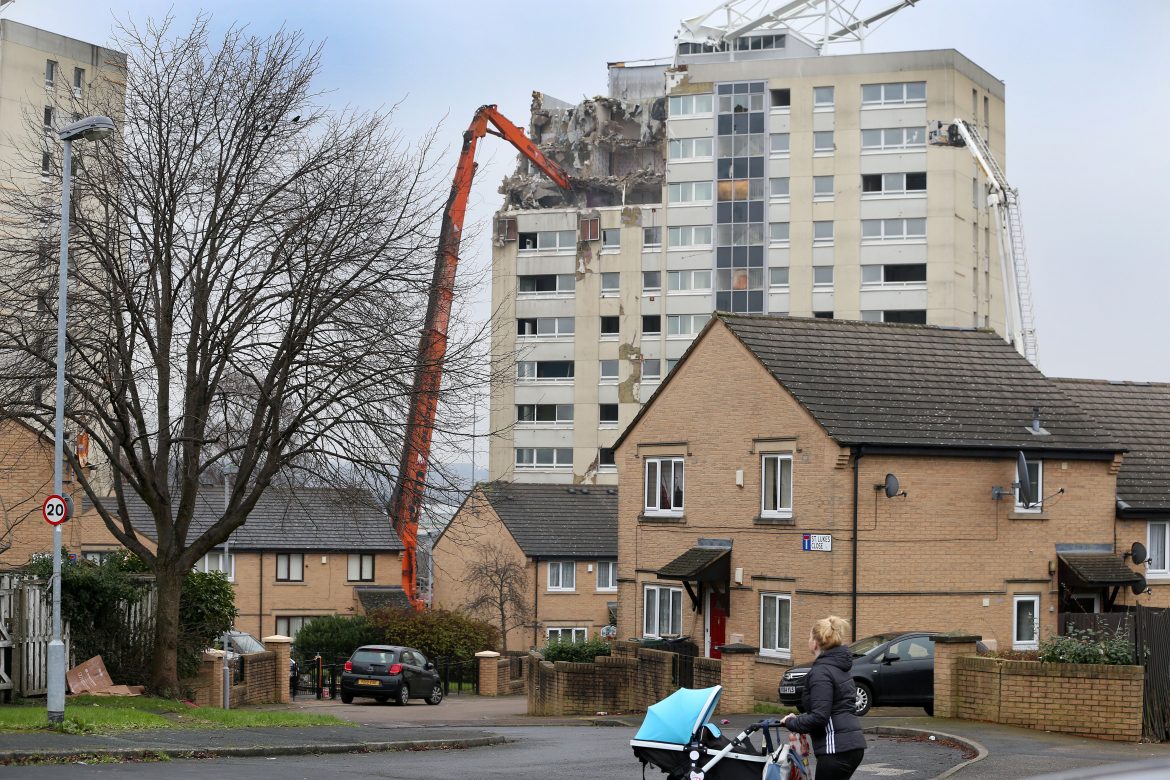 A giant 62-metre-high excavator has begun the main demolition of eight high-rise blocks in Bradford, paving the way for a multi-million-pound development of family-sized homes.

Local contractors have been carrying out the internal stripping out of materials and cladding at the Stuart, Tudor, Hapsburg, Windsor, and Bolingbroke Court blocks, all of which are located near Manchester Road and owned by Incommunities.

The 140-tonne Hitachi high-reach machine – one of only three in the country – started work on the site last week, first demolishing the upper walls of Windsor Court before moving onto the other blocks.

The excavator was brought to the Bradford site in four sections via a special highways escort before being assembled, and it will work alongside two 80-tonne machines to pull down the blocks’ lower floors.

Incommunities says demolition work on the ‘court’ blocks is well ahead of schedule, and all five buildings are expected to be completed in the coming weeks.

Work is due start on the demolition of the three nearby ‘Y’ blocks – Ashton House, Osmond House, and Taunton House – early next year.

The process will involve removing the interior materials followed by demolishing the main structures.

Incommunities says all debris and material from the demolitions is being recycled and turned into hardcore for roads and construction.

Geraldine Howley, group chief executive, said: “These blocks have been home to thousands of people over the years, but sadly in recent years have proved difficult to re-let, despite our best efforts.

“This really is a significant moment and the opportunity to make a big step towards delivering a prestigious development of much-needed family homes fit for the 21st century.”

Director of Development and Growth Rupert Pometsey, who is overseeing the demolition programme, said: “It’s great to see these specialist excavators move onto site as we get to the business end of the demolitions of these blocks.

“Over the next few weeks, it promises to be quite a sight as the structures come down and we look forward to a new beginning for the community.

“We have planning approval in place and are now finalising plans to deliver a landmark development that will be a catalyst for the revitalisation of the area.”

Angela Perry, assistant chief executive of Asset Management, said: “We are all really excited about building a new future at Manchester Road.

“There has been a significant change in the type of homes people want, and it’s about providing the right housing in the right place.

“We are committed to regenerating the area with a development that provides attractive affordable homes within easy access to the city centre.”

Incommunities took the decision to demolish the Bradford blocks due to the consistently low demand for the homes and following a review of options.

All tenants were moved to properties in areas of their choice with the help of the the housing association’s Neighbourhood staff.

Planning permission is in place for both cleared housing sites to develop more than 100 affordable family homes, which Incommunities says better meets housing demand in the district.