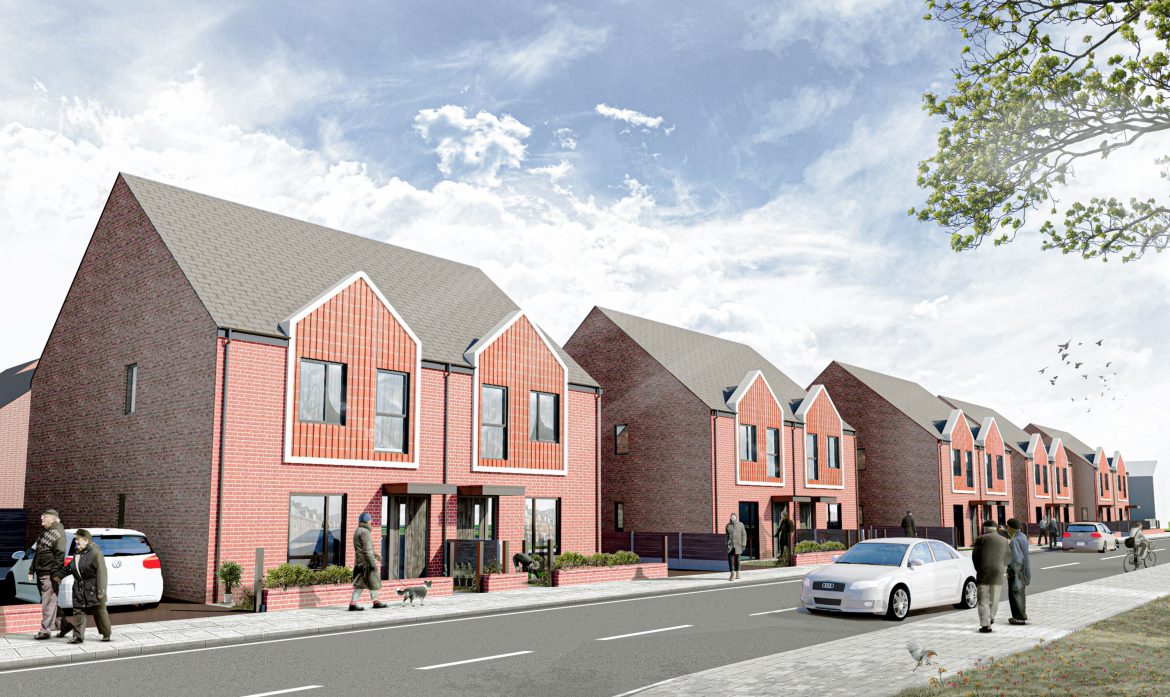 Housing provider One Manchester is building 45 properties on the old Crossley Motors factory in Gorton.

One Manchester says the new homes on Crossley Street will feature vertically stacked brickwork to the front elevation in an architectural homage to the striking metal radiator grilles found on Crossley cars and buses.

The bricks will contrast against the horizontal pattern used everywhere else and will be highlighted by a white surround.

The factory closed in 1958, and the site is now being transformed by One Manchester to help first time buyers on to the housing ladder.

The £5.8m scheme, christened Crossley Grange, will comprise a mix of two-, three- and four-bed homes.

One Manchester received £1.3m from the Homes England Shared Ownership Affordable Homes Programme, which was bid for via social housing consortium JV North.

Homes will be offered as shared ownership properties to give people chance to buy a share of their home and pay rent on the remaining amount reducing the deposit and mortgage needed.

Properties will have a private amenity space, private car parking, and cycle storage at the back.

Catherine Halstead, senior development manager at One Manchester, said: “We’re really pleased to be delivering this development, which will bring some much needed affordable housing to the heart of Gorton.

“At One Manchester, we’re dedicated to creating thriving communities and this allows us to continue providing local residents with the opportunity to get on to the housing ladder.

“The homes at Crossley Grange will be built to a high standard, lowering utility bills for the new occupiers.

“We’ll also be providing electric car charge units at every property to improve the sustainability of the transport in the area and links back to the Crossley Motors factory, the site’s original owners.”

Crossley Grange is situated close to primary and secondary schools, with local amenities including a shopping centre, supermarkets, and a pharmacy a short walk away.

The scheme is expected to be completed in August 2021.

One Manchester owns and manages more than 12,000 homes in central, south, and east Manchester.

Crossley Brothers was founded by Francis and William Crossley in 1867.

One of the most prestigious businesses in the North West, the firm developed some of the first modern petrol engines.

It was a major supplier of military vehicles during the First and Second World Wars making cars and trucks for the British Armed Forces and Allied countries.

Crossley Motors went into full scale bus production in 1926 with models including the Eagle, Hawk and Mancunian.

Henry Ford, who visited in the early 1900s, is said to have based his revolutionary production line technique on the methods he witnessed.

Read next: Your Housing Group to deliver more affordable housing in Greater Manchester