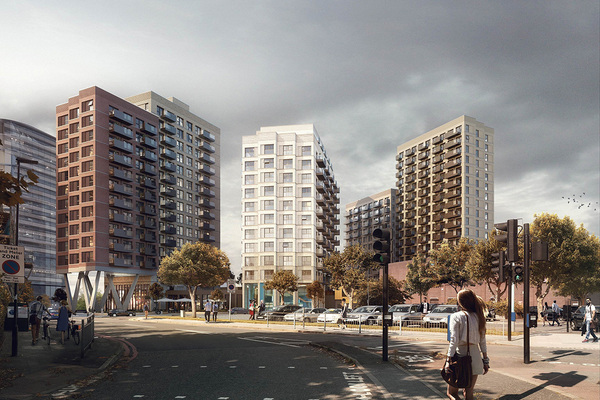 The housing secretary’s decision will see L&Q build five new residential towers of between 12 and 18 storeys in Brentford after Hounslow Council refused planning permission for the scheme in February 2018.

Hounslow Council initially rejected the scheme over concerns about its impact on the world heritage site at Kew Gardens and other nearby listed buildings and conservation areas.

Then, Jenrick’s predecessor, James Brokenshire, made the final decision in April 2019.

Now, a decision letter published by the MHCLG said Jenrick agreed with the inspector that the development would cause “less than substantial harm” to its protected surroundings.

“Against this he weighs the provision of housing, including affordable housing, which he considers carry substantial weight in favour of the scheme,” the letter added.

However, the housing secretary noted that “positive aspects of the design” were “negated” by the fact that daylight levels in 75 of the habitable rooms will fail to meet Building Research Establishment standards.

The brownfield site, in Brentford, currently sits as a Peugeot and Citröen car dealership.

Of the affordable homes built by L&Q, 66 will be for London Affordable Rent – Mr Khan’s social rent-approximate product – and 152 will be for shared ownership.

“Benefits for the whole community”

Commenting on the approval, Vicky Savage, London managing director at L&Q, said: “We’re delighted that the secretary of state has approved our plans for the Citröen site.

“The redevelopment of this site will result in 441 new homes for Hounslow, of which 50% are affordable, while supporting hundreds of jobs throughout construction.

“Our plans will deliver benefits for the whole community, including a nursery, retail spaces and a public square, alongside a significant investment in infrastructure improvements.”

Steve Curran, leader of Hounslow Council, said: “I am delighted this scheme has now finally been approved.

“The provision of 441 new homes, 50% of which are affordable, will go a long way to meeting our housing need and our ambitious housing pledge to secure 5,000 new homes by 2022.

“L&Q have a proven track record of providing good quality homes in Hounslow and London.

“I welcome the jobs that will be created during the construction, which will help our local economy due to result of COVID-19 and the collapse of the airline industry.”

The L&Q scheme isn’t the first to be approved after initially being rejected by the governing council.

Recently, the Mayor of London approved plans for a 514-home scheme on a former Master Brewer site in Hillingdon, west London, after the borough rejected the scheme on design grounds.

Sadiq Khan approved the development earlier in September this year, despite the concerns of Hillingdon Council.

However, the housing secretary has since issued a ‘holding direction’ over the scheme, meaning that the project will now go to him for final determination.

Read next: HACT launches roadmap for future of social value in social housing