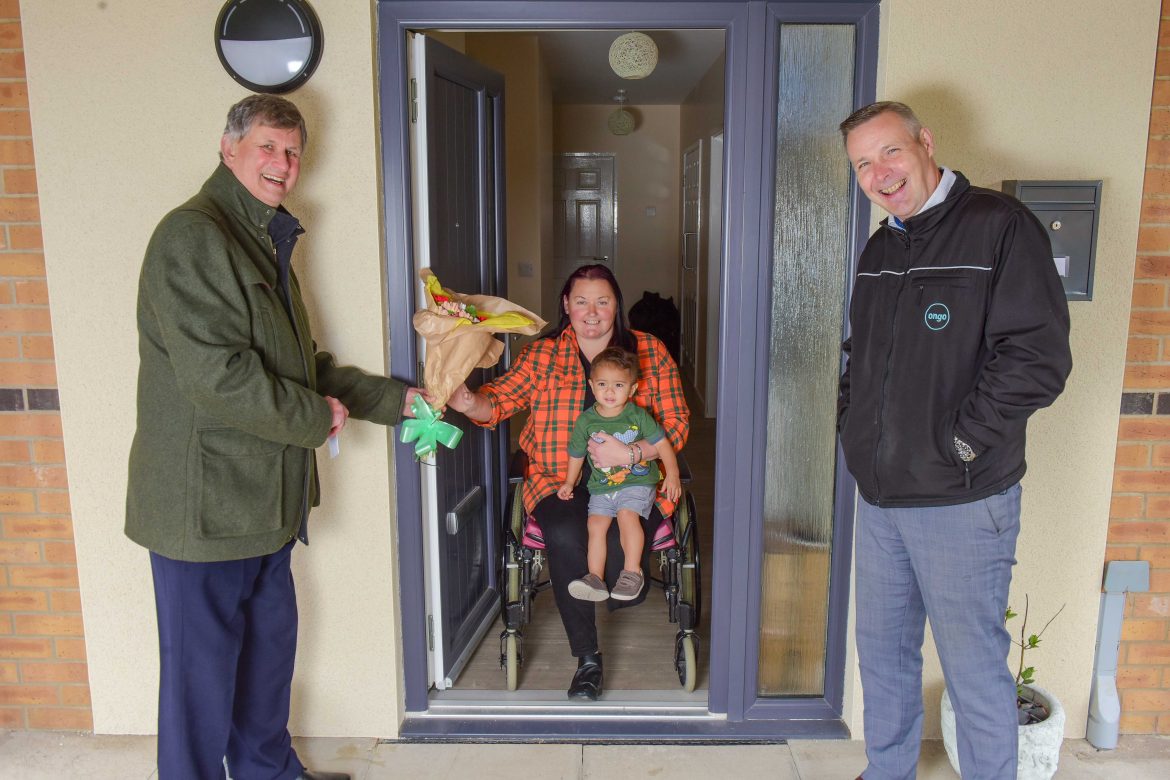 After a torrid couple of years involving a leg amputation and a dual-diagnosis of COVID-19 and sepsis, things are finally looking up for Ongo tenant Jo Russell. In September, she become one of the first people to move into one of the provider’s 79 specially adapted, new-build bungalows in Westcliff, Scunthorpe

Life hasn’t been easy for Jo Russell. A survivor of domestic violence, Jo thought she had escaped the woes of her former world when she found a new place to live 10 years ago with Ongo. Things were beginning to look up for the 46-year-old, who by this time was living happily with her children in the place she now called home.

But just as she was settling down and enjoying her new life, in 2019, Jo’s fortunes fell foul once more when she received the devastating news that she had to have her leg amputated.

“I was coming down my stairs and I fell,” says Jo, recalling how the nightmare began. “I only had four steps to go, but I knew straight after I’d hurt my toe. I didn’t think it was anything serious.”

Jo tried to walk it off at first, but with the inflamation and swelling refusing to abate, she resigned herself to A&E.

“I thought I’d be sent home to rest it,” says Jo, “but after tests and countless doctors giving their opinion, I was told my toe must be amputated.

“This was shocking and deeply upsetting, but we went ahead with the operation.”

Not long after, Jo came down with another infection, and this time all her toes had to be amputated. But still the infection remained, now racing further up her leg.

Drastic action was needed, and in December 2019, Jo’s left leg was amputated. “I had to make sure I was here for my children,” she says.

For Jo, life had changed immeasurably. She could no longer climb stairs, could only wash using the kitchen sink, and with no adaptations in place, was struggling to even move round her house. Jo’s safe haven was no longer, and she knew she had to move.

But in March 2020, any plans Jo might have had to move home were cruelly thwarted when she was diagnosed with both sepsis and COVID-19. Her family were told to prepare for the worst.

For Jo and her family, the valley of despair had never been so deep. Yet, her indomitable reslienece shone through once more. Amazingly, just a few weeks later, Jo was given the all-clear and allowed to go home.

However, just a month later, Jo had to once again seek medical. “I had another infection, and my mental health really struggled during this time,” she says.

As July came round, when she was at her lowest ebb, Jo finally received some much-overdue good news.

After months of desperately looking for a new home, she received a phonecall from Ongo’s Lettings Team who informed her that her application for a specially adapted, new-build bungalow in Westcliff had been approved.

“I can’t express how much this meant to me,” she says, “apart from to say this truly was the light at the end of the tunnel I needed.

“When I viewed the bungalow, I couldn’t believe my eyes – it was everything I needed and more. Every room I looked in, I knew it was going to change my life. I can finally live my life and be independent.”

Jo and her family moved into their new home on 30 September, and her life altered once more – this time for the better.

“It sounds cliché, but this house has truly changed my life, and not only that, it’s saved it,” says Jo.

“I’ve put plans in place to get back driving next year, and once I’ve done that I’ll be back to where I was before losing my leg.

“Then I want to go back to work and am determined to make it happen.”

Jo’s new home is fully adapted for her wheelchair, and there’s more space than in her previous home, allowing her to move around freely.

All door handles have been adapted, plug sockets raised, light switches lowered, and Jo can adjust the height of the kitchen worktop for cooking.

Even the windows have been lowered, so that Jo can see outside when sitting in her wheelchair – a feature she has been especially pleased during lockdown periods.

“My favourite part is definitely my bathroom,” says Jo. “It’s given me my pride back, and I can spend so long sat in my shower chair now.

“After washing in a kitchen sink for nine months, it’s just the best feeling.”

Few people experience such head-spinning ups-and-downs as Jo and her family. And while Jo herself will no doubt agree that she’s been through hell and back multiple times over, their lives have since settled into a state of stability and hope.

Jo’s daughter regularly discusses jobs and training with her Ongo Youth Mentor, Jemma; and Jo herself has made links with Ongo’s wellbeing centre, The Arc, often speaks with Sunita from the Support Team, who assists wth claiming the support and benefits she is entitled to, and has joined Ongo Talk, a counselling and life-coaching service.

“I didn’t know much about Westcliff, apart from it had a bad reputation – but I can honestly say it’s false, and it’s the best community I’ve ever been a part of”

She has also made some new friends in the local community.

“I didn’t know much about Westcliff, apart from that it had a bad reputation,” says Jo, “but I can honestly say it’s false, and it’s the best community I’ve ever been a part of.”

She adds: “None of these plans would be possible without the help of Ongo – I can’t thank them enough for all of the help they have and are continuing to give me.

“My life is really looking up, and for the first time in a while I am excited for mine and my family’s future.”

Ongo says it is committed to providing options for all within its developments, so that families can live independently for as long as possible with the care and support they need.

Read next: One year on: Stonewater’s employee-only shared ownership scheme