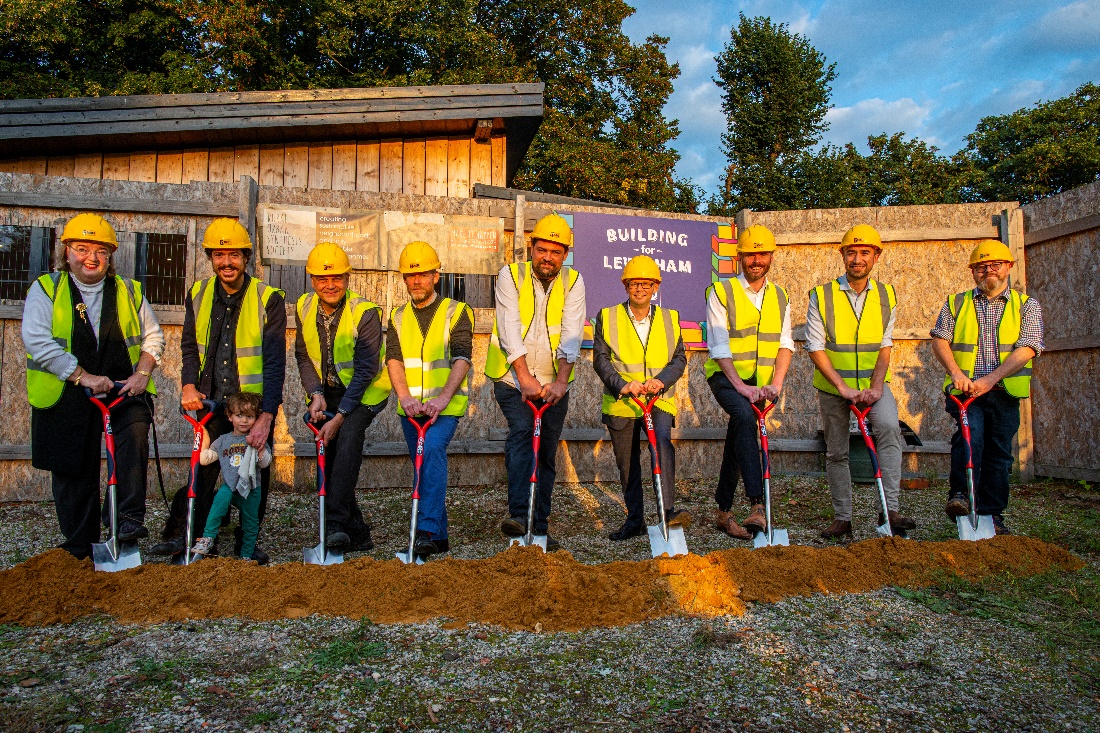 A community-led housing group in Lewisham has begun construction of 36 permanently affordable new homes – the largest project of its kind ever undertaken in London.

The sustainable homes, available to local people who meet the scheme’s affordability criteria, are being built with the aim of being permanently affordable to future generations of tenants and buyers, with no developer profit being made and a resale covenant in place to maintain affordability.

RUSS says that a range of property sizes and tenures, including six social-rented homes for residents on Lewisham Council’s housing waiting list, will help to create a diverse resident community.

The project includes communal food-growing and gardening spaces, a shared laundry, and a publicly accessible playground.

A Community Hub, built by nearly 100 volunteers in 2019, stands alongside the new homes and will serve as an affordable, eco-friendly work and events space for the local community.

The scheme was co-designed by a group of the future residents working alongside expert architects, and the residents will also have the opportunity to build it alongside local apprentices and volunteers.

Funding for the scheme has come from a combination of sources including grants from the GLA and loans from Triodos Bank UK, Big Issue Invest, and CAF Venturesome.

The scheme has also been supported by Lewisham Council, who leased the land to RUSS.

Building work is due for completion in 2023.

More than 10 years of planning

Future resident of the scheme and RUSS founder Kareem Dayes celebrated the achievement.

He said: “My parents built their home as part of a pioneering Lewisham Council project 30 years ago, and this inspired me to set up RUSS to see if the next generation could deliver something similar.

“It’s taken a long time – more than a decade – to get to this point, and hundreds of local people, volunteers and councillors have been involved and supported us along the way.

“It’s been tough going too, with various set-backs along the way. But the passion and perseverance of the people involved has won through, and we are now finally ready to start the building work.”

RUSS’ chair, Bernadette Marjoram said: “I want to thank the many people who have helped RUSS reach this tremendous milestone, including the future residents of the scheme, Lewisham Council, the GLA and our more than 1,000 RUSS members.

“There have been many hurdles to clear on the way – securing an affordable site, funding the design team’s work, financing the construction contract, recruiting volunteers, and spreading the message that communities really can deliver affordable, sustainable homes for themselves.

“We hope this project will inspire other groups to follow the RUSS example”.

The land for the scheme has been leased to RUSS by Lewisham Council, and six of the homes will be social homes for families on the council’s housing waiting list.

Speaking at the event, Mayor of Lewisham Damien Egan, said: “At a time when many people in Lewisham are struggling with a broken housing market, it is fantastic to see work begin on this community-led housing project, delivering permanently affordable homes for local residents and new social homes for families on our housing waiting list.

“We’re proud to be supporting RUSS with the land for this scheme, as part of our commitment to tackling the housing crisis in Lewisham, and I look forward to seeing residents move into their new homes in 2023.”

The GLA provided pre-development financial support through the Innovation Grant Fund, and gap funding from the GLA’s Community Housing Fund will be used during the development phase.

Deputy Mayor for Housing and Residential Development Tom Copley said: “To tackle the capital’s housing crisis, we need a vibrant and diverse market with developers of all sizes playing their part.

“Community-led housing puts residents at the heart of the process, giving them a voice and the chance to contribute to designing their community.

“This is exactly the type of project the Mayor’s Innovation Fund was created to support, and I’m proud to be here to support RUSS members in delivering much-needed high-quality social and genuinely affordable homes.”

Gwyn Rhodes, head of Business Banking at Triodos Bank UK, which provided lending for the project, said: “Supporting affordable, community-led housing – which is being built with a net-zero carbon future in mind – is key to our mission as a bank.

“RUSS’s work at Church Grove is a fantastic example of this, and it’s a great moment to see the construction begin.”

The beginning of building work on RUSS’s first housing project marks a major milestone for the community organisation, which was founded in 2009.

It works to help other community housing groups learn from its journey through its School of Community Housing.