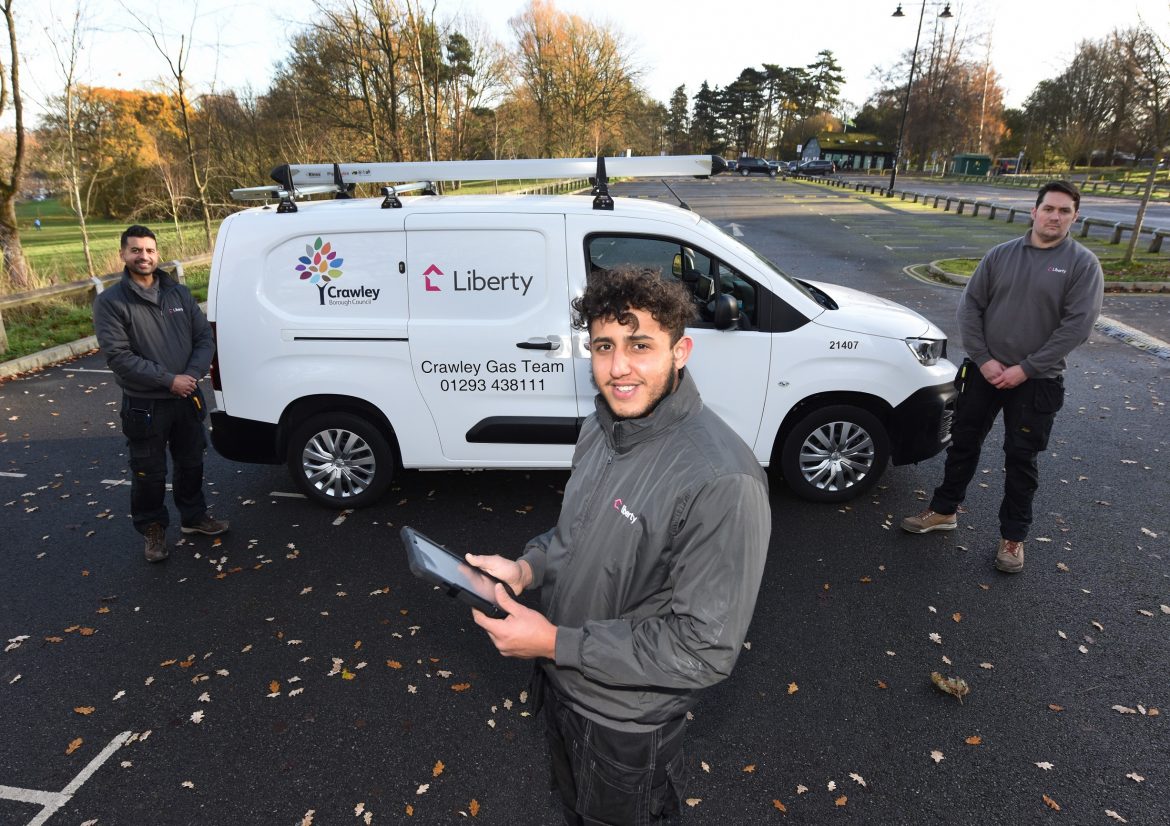 In June, plumbing graduate Ali Merrouche was visited by a Liberty engineer for a routine boiler repair. Never did he think that three months later he would be working as the organisation’s newest apprentice

Gas engineer Shashil Perkash was undertaking the repair work in June as part of Liberty’s gas servicing and maintenance contract with Crawley Homes.

During the works, he learnt from the customer that her son had just completed his NVQ levels 1 and 2 for plumbing but was struggling to find an employer that would provide him with hands-on experience while he was continuing his qualifications.

She explained that 19-year-old Ali needed an apprenticeship but that it was a challenging time as no one was hiring because of the Coronavirus pandemic.

During the conversation, Shashil began sharing his experiences working for Liberty, part of the ForViva Group, and the flexibility and opportunities that are offered to staff.

He suggested that Ali bring his CV up to date and encouraged him to send it to him so that he could share it with Liberty’s Contract team.

Keeping to his word, Shashil forwarded Ali’s CV to Liberty’s Contracts manager for Crawley Homes, Carl Himsworth, and they both agreed that he would be a good candidate for an apprenticeship with the team once a role became available.

And Ali didn’t have to wait long. In September 2020, an apprenticeship vacancy opened up and he was invited to an interview.

Ali was offered the job shortly after.

“I couldn’t believe my luck when an appointment to get our boiler repaired opened the door for me to secure an apprenticeship with Liberty,” Ali says.

“It was a really difficult time over the summer to be doing plumbing qualifications. The practical experience I needed wasn’t easy to gain because of the pandemic.

“When Shashil told me about Liberty’s approach and offered to help me, I knew this was the kind of company that I wanted to work for, and I’m so grateful to him for the support he’s given me.”

He will also be assisting with planned boiler and heating system replacements to Crawley Borough Council’s housing stock – as part of a 11-year contract worth £34.3m that began in 2019.

Councillor Ian Irvine, cabinet member for Housing at Crawley Borough Council, says: “This is a great story and just shows that opportunity can knock when you least expect it.

“I wish Ali all the best as he embarks on his career working in our properties with Liberty.”

Ali adds: “I’m now in a permanent role with Barry Fidler, who is an experienced engineer, as my mentor and getting the on the job experience I need to become fully qualified.

“I’m really excited for what the future holds.”

Read next: Jo’s story: How Ongo saved my life