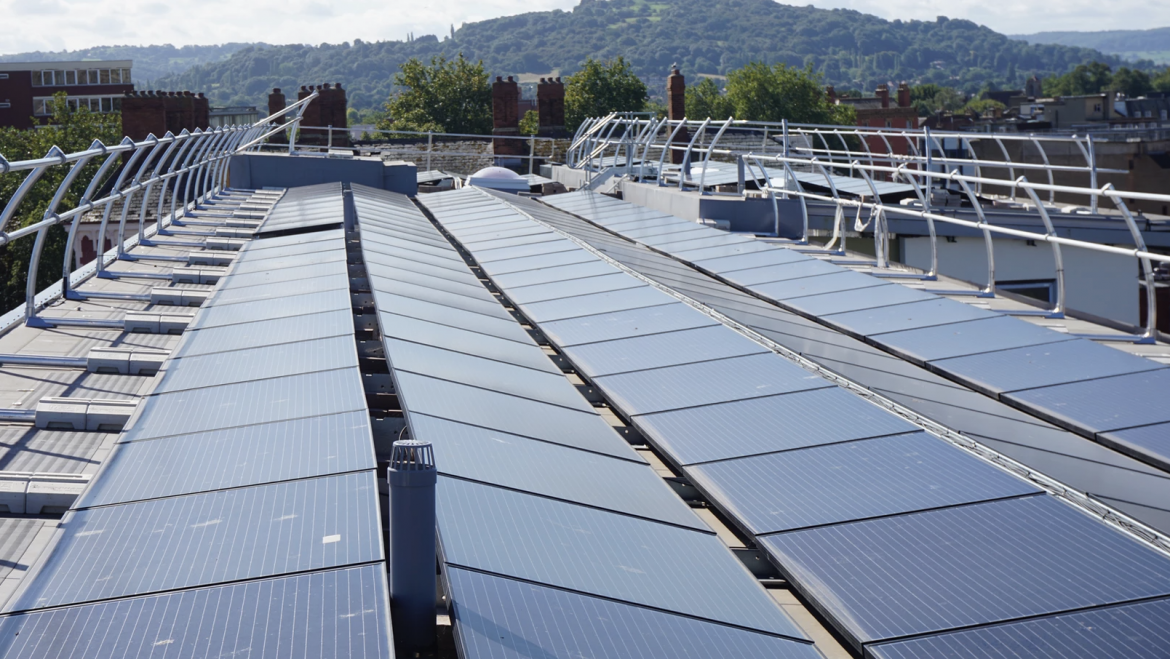 Housing Digital talks with Rebecca Pitt, Programme Delivery manager at Worcestershire-based Rooftop Housing Group, to find out how they set about smashing their sustainability targets and then some

How did the Rooftop Living Homes Standard come about?

The way it came about was that, historically, when code for sustainable homes was in practice and as a housing association we had to target code Level 3 as the minimum for grant-funded homes. It was quite a nice standard, if you like, in that it was all-encompassing in terms of sustainability. So it did look at recycling the open space, the storage. It was what you’d consider sustainability to be.

And then when that fell away…there was something missing in terms of the quality of the homes that we were expected to provide.

So, we did some work with the SHAP [Sustainable Housing Action Partnership] seven categories…and that’s as far as we’d got.

That’s when we came up with this wheel concept and said, we need to build to building regs, and we could churn out those building regs boxes all day long and probably deliver more of them as a result. But actually, we know where we want to be, and we know we’ve got a social responsibility to our customers.

We’re all about improving the lives of our customers, so one way we can do that is giving them a home that’s cheap to run and that’s in a nice development with space for them to enjoy. Its about the proper storage, its about the recycling bins – so that’s sort of how it came about and trying to find this model that covered all that.

We know we don’t have to do it, but we want to, and it’s what we strive to do to make the best use of those government funds we’re given and make them go as far as we can.

What is the Rooftop Living Homes Standard Plus?

The Living Plus is where we can go above and beyond. So, at the moment it’s if we can hit the Nationally Described Space Standards, so our new schemes are being built to these nationally accepted standards.

It’s not compulsory in any way shape of form, but the more space people have got the better enjoyment they’ll have of their homes. And it’s also things that are a little bit more out there in terms of, we want to get some more PV [photo-voltaic] batteries on some of our properties. Again, it’s not something we’ve actually done yet, but it’s something we strive to do. So if we’re targeting those things in the outer Living Plus bracket, then actually we’re always striving for betterment.

“We know we don’t have to do it, but we want to – and it’s what we strive to do to make the best use of those government funds and make them go as far as we can”

I think it’s something that we will review the model on an annual basis because we accept that certain things that we’re doing now in a year’s time or two years’ time will become more standardised. So if I give an example of electric car charging points. Nobody was really doing them two years ago, but now it’s a planning condition, so we have to do it as standard. It’s moving from a Plus Standard, if you like, to just what we will do on any of the schemes.

Why did you decide to go with a fabric-first approach for new developments?

The value of fabric-first is that ultimately the box that you’re building is as air tight and as well insulated as [can be]. It’s the cheapest way to do it so that you’re not paying out on all these expensive technologies. So, if the box is well insulated, and there’s no leakage or no drafts for the heat to escape, then actually the technology that you put into that property needs to do less. There’s less heating required because it’s not going to escape, and hopefully you’d use less energy as a result and reduce the costs.

It’s the approach that a lot of developers are taking now – to increase the insulation, basically.

You are building a lot of new homes to EPC A standards. Is that expensive to do?

It is more expensive than doing an EPC C or B model, but I think it’s setting that precedent from the outset…when you go into the design. Because actually, once you’ve got the right insulation in there, the property itself isn’t going to let out the heat and you’ve got the right air-tightness, then it’s about having the right technologies in there. So, as long as you tell your contractor, that’s what I want, they will design that from the outset. And it is more expensive, but the sooner you start looking at that the easier it is to achieve.

Sometimes it’s making sure that the right boilers are going in, so it would be a highly efficient boiler at the right levels of insulation; and when we’ve got the photovoltaic panels on the roof, as well, that brings down the energy use.

With the right windows in, again, in our outer circle we’ve got triple glazing as an option, and I think that is where we’ll be going eventually when we get to the next zero-carbon.

In what ways does your commitment to sustainability coincide with the need to keep fuel costs down for residents?

We’ve got existing homes that we acquired from the local authority that are really poorly insulated, and as much as we can throw cavity wall insulation in there and double glazing, actually the fabric of the building, because of its age, they’re always going to use more heating and be more expensive to run.

One of the projects we’re actually doing at the moment is where we’ve just demolished 10 homes that were what’s called Airey houses. They were non-traditional, built in the 1940s-1950s, a bit of their own modern methods of construction. Literally, it’s just wallpaper holding some of those walls together on some of these houses, and we’ve demolished them to build 21 new ones.

In terms of their EPC rating, they were D’s, E’s, and F’s, and will be hopefully now be EPC A rated. So they [residents] are going to have a massive saving on their bills – they’re going to come down by 50% – and that’s a big thing for people.

To what extent are you utilising MMC in your new developments?

The government has actually got an MMC framework of what their definition of modern methods of construction are, and one of the things that they accept under that definition is a timber-frame house. So we do a lot of timber-frame property developments, sort of an open panel system, they call it, where a timber frame comes to site, box it out with insulation, boards, plaster on the inside, a brick skin, a render or a clad on the outside. They’re very efficient in terms of when we look at the fabric-first, and they’re very quick to build.

But also…we completed a site last year of seven homes in a little village in Gloucester called Staverton, and that was using a product from Premier Modular. So, at the moment, what we’re trying to do is look at all these other options that are out there…to see what all the different products are and actually see what works best for us.

What I would say is that where MMC might work on one site, it might not be suitable for another in terms of the areas we work. There’s a lot of villages, and you’ve got a lot of conservation areas, you’ve got historic buildings and listed buildings out in the middle of nowhere…sometimes going down the traditional design route in terms of traditional build or timber-frame, it’s that aesthetic of the building that we consider as well, and MMC isn’t suitable.

And the volumetric that comes to site, ready-made basically, you don’t have as much control over what it looks like because it comes off a production line. If you start saying, well I want three of them to have this finish and three of them to have that finish and those ones to be a little bit bigger than the others to give ourselves some variety, that’s where the cost goes through the roof.

It needs to be a site that can handle the standardised approach, and not all locations are suitable for that.

What have you got planned for the future?

We’ve got a couple that are in planning at the moment, one that I showed you on the presentation [see below], which is a big scheme in Worcester…we’ve gone through a really urban design scheme in that we’re trying to maximise the south elevation, so that’s a really exciting one to see come up to fruition, and that’s all NDSS [Nationally Described Space Standard]. We’re trying to get the Plus standard on that one.

But that’s not a million miles away from a Grade 1 listed abbey, so again, from a design point of view, we may not be able to get the PV on there because of the proximity to a listed building. And there’s some of the restrictions you have that stop you from sometimes being able to achieve things in the way that we’d quite like to.

So, we’re going to attack something with the best intentions, but we sometimes have to accept that…we can create a high-quality scheme people are going to love and it’s going to look great. But we may not get the PV on that one that will give us the credentials that we would like.

More from the Sustainability Showcase series: