Home Features Thirteen: How we saved £500k by overhauling our repairs system

Thirteen: How we saved £500k by overhauling our repairs system 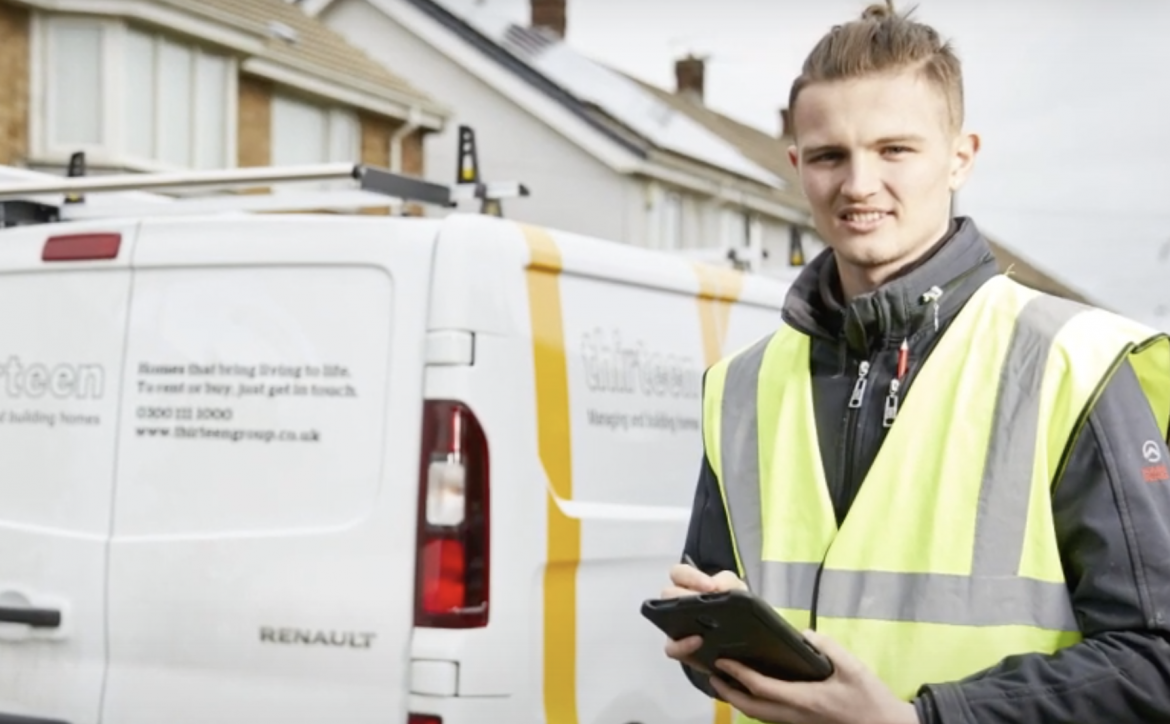 Housing Digital talks to Thirteen’s Head of Repairs, Stephanie Lawlor, to find out why they decided to overhaul their repairs system – and how it’s paying off for them in an increasingly digitised world

Thirteen has become one of the most progressive and innovative social landlords in the north east of England. It’s been recognised for its efforts to improve sustainability, diversity, customer engagement, and more; an unwavering G1/V1 rating from the Regulator of Social Housing cementing the high standards for which the group has become known.

As an organisation, Thirteen is growing up fast. But such a rapid rise doesn’t come without its growing pains.

Out with the old

Starting as Thirteen in 2014, through mergers and consolidations of companies, it quickly became clear that its repairs system was not going to cut it.

Each of the former organisations had used a different system, and now that they had all come together, they had to get to grips with an entirely new system that was cumbersome, dated, and counterproductive. With around 12,000 repairs completed each month, a change of plan was needed.

“It wasn’t doing what we needed it to do, it wasn’t dynamic, it was sending people all over – we were raising repairs through a housing system rather than a repairs system,” says Stephanie Lawlor, Thirteen’s head of Repairs.

“We saw the performance dip, and we weren’t getting it right first time.”

Thirteen found that one of the biggest issues of the system was the effect it was having on staff morale – tradespeople in particular.

“The scheduling team had so many calls. We knew we had to improve the colleague and customer experience,” says Stephanie.

The first thing Stephanie and her team did was start work to procure a completely new repairs system.

They wanted to find a new system that was better digitally integrated, easier to use, more responsive, and which would allow Thirteen to maintain its high standards of compliance.

“That’s when we decided to go out to tender,” says Stephanie.

“We had five systems in total. So we had different areas of the business involved – we had colleagues from IT, repairs, voids and finance – but they all got to see the demo, they all got a feel for what was out there in the market place.”

They ended up going with housing technology solutions company ROCC, deciding its offering of contractor and sub-contractor portals, dynamic scheduling, and fully managed cloud solution, among other features, was the best fit for what Thirteen wanted to achieve.

Now that Thirteen had decided on a new repairs system, it was time to hunker down and get the system rolled out. It would not be a process that would be completed overnight, though – in fact, it’s still continuing today.

However, Thirteen’s elongated timeline was partly by design, opting for a phased approach to installing each subset rather than a ‘big-bang’ approach, as Stephanie calls it.

Eager to avoid repeating past mistakes, Stephanie and her team got started on the phased rollout. It was a calculated decision based on reduced risk and improved buy-in from staff and contractors.

“We’ll do a section at a time, and then if it doesn’t work we’re reducing the risk in different areas,” Stephanie recalls thinking.

She adds: “That’s why we did it in a staged approach, just to get the buy-in at each stage so that the operatives on the first stage would be like, ‘it’s really good, it’s much better than what we had,’ and they would then sell it to the other teams.”

The success of the new system would largely be determined by the ability of staff to both understand it and use it, which is why Stephanie and her team decided to embark on a thorough and detailed training programme, the likes of which they’d never tried before.

“Previously, what we would do, whether it was operatives or schedulers or contact or finance, we would basically give them a manual,” says Stephanie. “So we’d give them a manual that was screen printed and we’d go, ‘there you go, there’s your new system, go and have a practice for a couple of hours.’

“But it didn’t work. So, this time we got the trade operatives in to learn the system through established training sessions.”

The first phase sought to train around 150 operatives in sessions of 12, each session lasting roughly half of the working day. Each would be led by Stephanie, the IT team, and a manager, who would train the operatives on all aspects of the new system relevant to their line of work.

“We had the PDA [Personal Digital Assistant], so it took a lot of time just to raise the jobs, because 12 people in the room got five each on the training session,” Stephanie explains.

“But we went through every job with them, using real examples, such as how we carry out no-access, how we add materials and van stock, so they could learn how the system would work for them.

“When they left the room they said themselves they felt much better.”

“Downtime is not great for anyone, but planned downtime is a lot better”

The thinking behind the whole training programme was that we would ensure all operatives were familiar with the new system and how to use it. By being prepared for the array of potential scenarios that might arise, Thirteen would ultimately reduce the risk of something going wrong – and in turn help keep both colleagues and customers happy.

The thorough approach would turn out to be the right call. But that’s not to say that, at the time, Stephanie and the team weren’t apprehensive about the idea.

“Obviously, downtime is not great for anyone, but planned downtime is a lot better and being able to plan that 12 operatives don’t have an appointment that morning.

She adds: “Previously, we may have been concerned about the downtime…but the time we saved when we went live was much better.”

The fruits of labour

The majority of the system has now been rolled out, and Thirteen is starting to reap the rewards of its investment. In just one year of the system being in place, the organisation made around £500,000 in savings – on its subcontractor line alone.

“It was quite easy,” says Stephanie. “We could see our spend on contractors was quite high.

“We had the same budget forecasted next year, and as soon as we were in the system we could see the operatives churning out more work basically, because it was so dynamic.

But it’s not just finances that have improved. It’s also the morale of the operatives and more importantly, the satisfaction of customers. For repairs, the level of satisfaction has reached 92.8%, owing in large part to a right-first-time figure of more than 98% and the average completion falling from around 11 days to 5.8 days.

The icing on the cake is the Net Promoter Score (NPS), which measures customer experience and predicts business growth, and is generally seen as a proven metric for measuring customer experience. Since the introduction of the new repairs system, Thirteen has achieved an NPS of 77.22. Anything above 70 (out of 100) is considered ‘outstanding’.

Progress refused to slow even when COVID-19 hit. Like the majority of registered providers, the initial lockdown in March precipitated a large increase in Thirteen’s repairs backlog; but by May, Stephanie and her team had already got it under control. By June, they had reopened the door to external repairs, and by September they had cleared the backlog entirely.

“We continued to carry out jobs that we could do safely. So, we were doing fencing, roofing, and bricklaying. I couldn’t see the need for that stacking up, when our operatives could work outside and not come into contact with anyone.”

Thirteen has now completed over 75,000 repairs since the end of last March. “It was a really big team effort, and a staged approach again,” says Stephanie.

Stephanie and her team aren’t content to rest on their laurels, however. As we head into 2021, they are hard at work tweaking and refining their system, and are looking to roll out the last few areas and get all teams on-device. (Investments is the only team yet to be added.)

Other plans include the rollout of a new text-messaging service, which will notify the customer when an operative is en-route, and adding a ‘shopping basket’ facility to the customer portal.

“There are some improvements to be made, but it’s more enhancements, I would say, on the products that we have already got,” Stephanie says.

“Anything system-wise that can help us improve the service for the customer, really. That’s our aim.”

Read next: Sustainability: The latest buzzword, or here to stay?